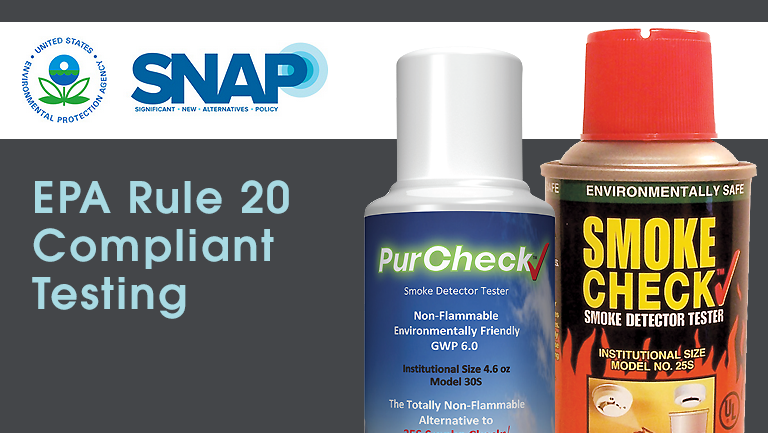 When the EPA’s Significant New Alternatives Policy (SNAP) program – specifically EPA Rule 20 – takes effect on December 31, 2017, various hydrofluorocarbons (HFCs) and HFC-containing blends that were previously listed as acceptable alternatives under the SNAP program will now be unacceptable for specific uses.

Answer: The good news is that aerosol and spray smoke detector sprays with no HFC or HFC-134a are compliant under EPA Rule 20. Products like PurCheck® and SmokeCheck®, which were designed to be environmentally-friendly from the beginning, contain no HFCs and are completely compliant with the new regulations as well as US and global fire alarm codes and standards.

There are products on the market that still use HFCs/HFC-134a – despite the fact they are known as a dangerous global warming agent. To be compliant with the new EPA standards, products using HFCs/HFC-134a as a propellant will have to be re-formulated and re-tested.

It’s important to also note that while some products containing HFCs/HFC-134a may remain available for use until stock is depleted, many fire detection personnel have decided to use compliant, environmentally-friendly alternatives to reduce the effect of harmful greenhouse gases.

Answer: In certain environments, like hospitals, a totally non-flammable smoke detector testing spray is required. However, certain ingredients, like ethanol (alcohol) that are present in some competitive products labeled as “non-flammable”, can actually be flammable under various test and commercial conditions.

Answer: To be clear, there are hundreds of silicones and none are “highly volatile.” Any silicone blends used in smoke detector testing sprays have been thoroughly tested on both ionization and photoelectric smoke detectors with excellent results.

In the case of SmokeCheck® and PurCheck® sprays, HSI uses proprietary formulations which employ silicones not known to cause crazing on plastic surfaces, which was further tested as part of the complex UL “Seal of Approval” program.

If you have questions about compliant smoke detector testing under these upcoming regulation changes, please call us at 847-427-8340 or contact us.